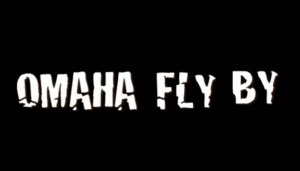 Tuesday, August 23, 2011 – Bulldog Publicity is proud to report that after a spring and summer of shooting and post-production in New Brunswick and Halifax, the CBC 3-2-1 Award-winning film, “Omaha Fly By” has been accepted into the Atlantic Film Festival in Halifax, NS.

“It is with great pride that Bulldog Publicity is a sponsor of “Omaha Fly By” and I am thrilled to see its acceptance into the prestigious Atlantic Film Festival. It was easy to get behind this highly entertaining CBC 3-2-1 award winning film and I am counting the days until everyone gets a chance to enjoy this film on the big screen!” -Jim Lavoie

Producers Lita Llewellyn and John Christenson are thrilled that the film has been accepted to the festival and hopes audiences across Canada enjoy the comedic short.

The Bride to be gets an eyeful in OFB

“We are absolutely over the moon that the film will premiere at AFF”, Llewellyn said. “As a first-time producer this is a thrill for me and I cannot thank CBC, the NB Filmmakers’ Co-op and the province of New Brunswick enough. Everyone has been so supportive and generous and I’m extremely happy with the final product and response to the film thus far.”

The CBC 3-2-1 Award was given out to the producer team at the 2010 Silver Wave Film Festival hosted by the New Brunswick Filmmakers’ Co-operative.

“I am so excited to hear the news that “Omaha Fly By” has been accepted for screening at the Atlantic Film Festival,” Christenson said. “If ever there was a film that showed true team effort, this is it. From its creation in a writing room to its ensemble cast to the editing and music, I couldn’t be more proud of the work and effort put forward. My thanks to CBC and the 3-2-1 Award, I hope your faith in our project shines on the big screen.”

“Omaha Fly By” will also be broadcast on CBC this Fall 2011 and will be submitted to the Silver Wave Film Festival on September 1.

This entry was posted in Uncategorized. Bookmark the permalink.

2 Responses to CBC 3-2-1 Film “Ohmaha Fly By” Lands In the Atlantic Film Festival!